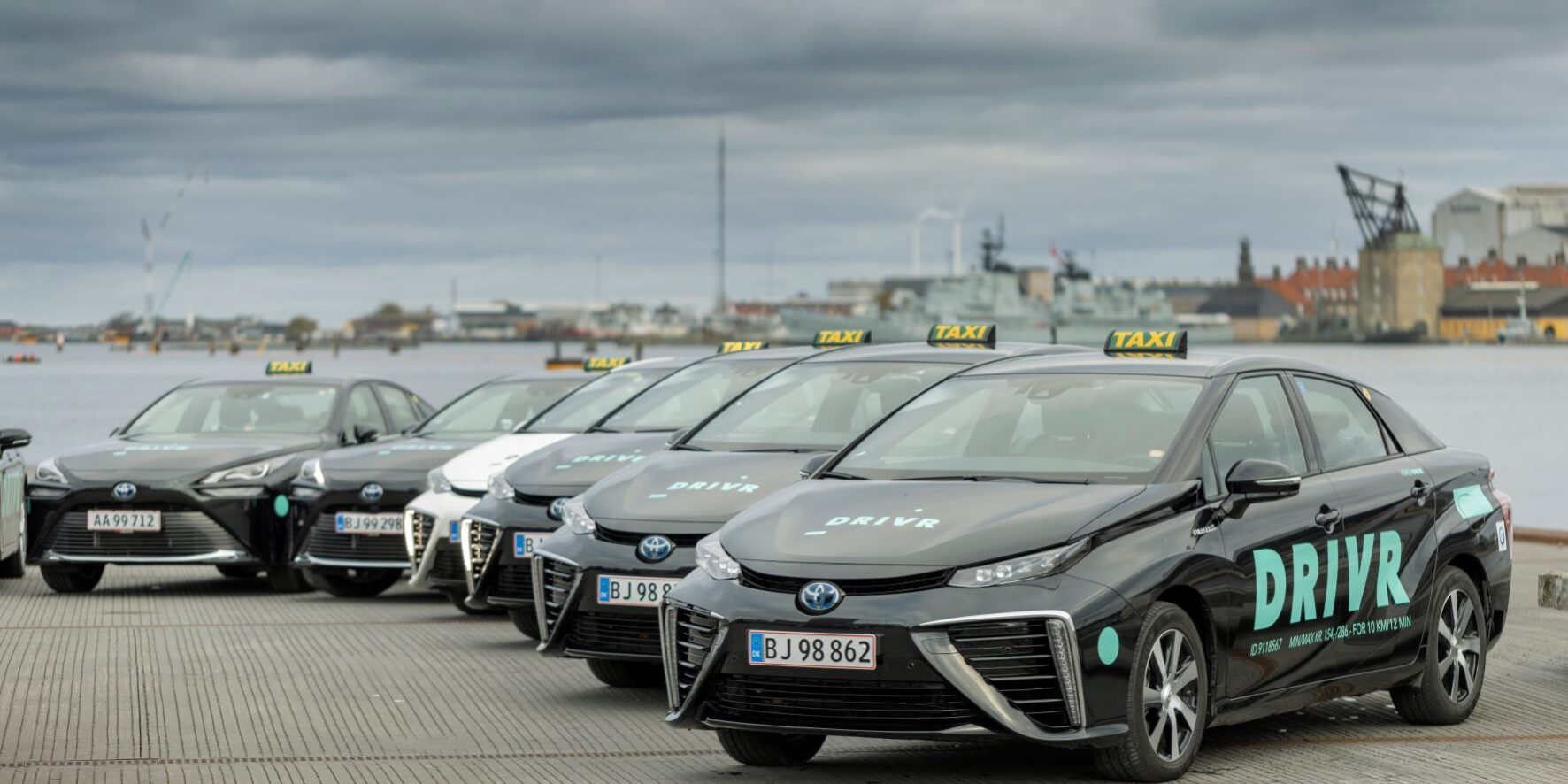 The green transition is rolling out in Copenhagen with 100 new, green hydrogen taxis on the streets

It is now easier to be green on the go with over 100 zero-emission hydrogen taxis available to Copenhagen passengers. The taxi company DRIVR is upgrading its efforts to provide emission-free solutions for Copenhageners’ transport needs, and is expanding the number of hydrogen cars in its green fleet from eight to over 100.

This was marked on Friday at Ofelia Plads in Copenhagen, where the cars were officially handed over from Toyota to DRIVR.

Mayor Lars Weiss (S) is pleased that more climate-friendly taxis are now coming on the roads:

“It is very positive that it is now easier for Copenhageners to make a green choice when it comes to hauling a taxi. The hydrogen taxis are helping to accelerate the green transition and contribute to a Copenhagen with cleaner air and less CO2 emissions.”

Hydrogen cars are particularly suitable for taxi driving, as they have a long range and are refueled in the same way and at the same time as a fossil car, which makes it possible to maintain the flexible driving patterns – but just completely without harmful emissions.

“The green transformation of the transport sector is a bound task that we must all help to solve, and we are on our way. There is a rapid development in the number of vehicles that run on alternative fuels, and it is very interesting with the various green solutions that help to ensure that even more cars run green.”

In the industry organisation for hydrogen and PtX in Denmark, Hydrogen Denmark, there are great prospects in the taxi industry for the expansion of both hydrogen fleets and tank infrastructure, explains CEO, Tejs Laustsen Jensen:

“There is no doubt that the taxi industry is a crucial force in the green transition. They are in constant operation, and travel many kilometers, especially in the big cities, every single day. Switching from black diesel to green hydrogen ensures the same operation and flexible mobility, just without harmful emissions. The many new taxis are helping to create the necessary reduction of hydrogen at the petrol stations, which is crucial for the infrastructure to be expanded. And then the taxis are as rolling shop windows for green hydrogen technology, which is an area where the strong, Danish value chain of subcontractors is among the best in the world.”

At DRIVR, there is a great joy and pride that the company has won the public supply for ad hoc taxi driving for the City of Copenhagen, says CEO, Haydar Shaiwandi.

“We are incredibly proud that DRIVR has been entrusted with the important task of helping the municipality making Copenhagen greener, which goes hand in hand with DRIVR’s ambition to become Denmark’s greenest driving service. We are pleased that together with Hydrogen Denmark we can focus on the important role of hydrogen in the green transition, and that they also supplement us with the necessary hydrogen for this important task.”

Alar Metsson, CEO of Toyota Denmark, which has delivered the many new Mirai cars to DRIVR, also sees hydrogen technology as an obvious solution in the taxi industry:

“We are happy to have delivered the first over 100 hydrogen taxis to DRIVR and are ready to deliver even more in the future. In this way, we support their mission to be the greenest taxi company in Denmark and at the same time contribute to Toyota’s own mission to go beyond zero CO2 from new cars,

The only discharge from the Mirai hydrogen car while driving is clean water. At the same time, it also cleans the air around it and removes both nitrogen filters and very small particles, which means that the more hydrogen cars driving in Copenhagen, the more they clean the air. This is one of the reasons why hydrogen also plays an important role in the green transitions.”